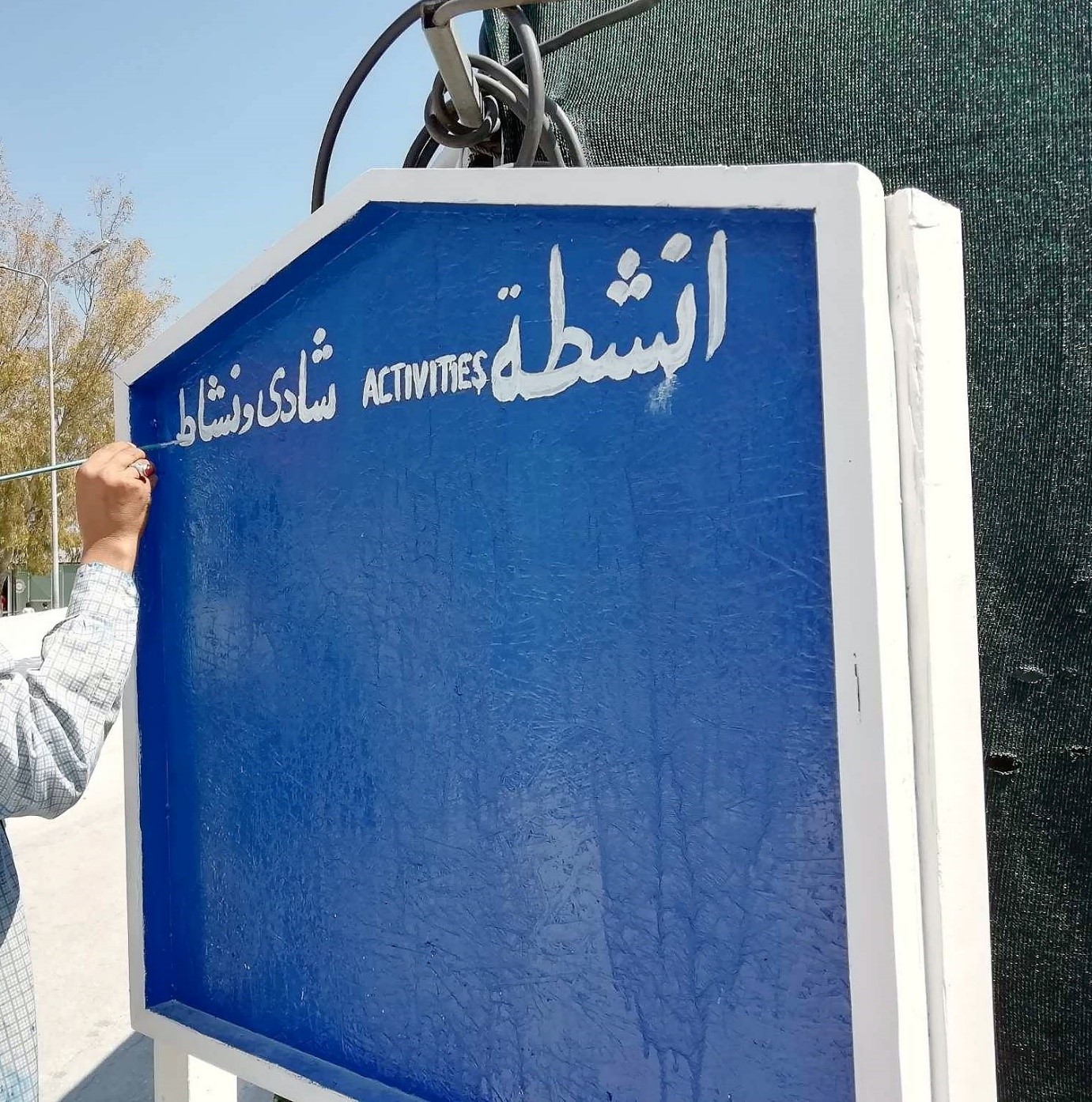 A new information board at Kara Tepe, mid-design, reflects the multilingual nature of the community

In my first blog, I introduced you to Movement On The Ground (MOTG) and the camps in which it operates. This time, I will introduce you to the linguists of the camp – who are by no means few and far between.

Due to the current demographics of Lesvos’ refugee population, the most widely spoken language in the camps right now is Farsi. In Kara Tepe, a resident who does not speak Farsi will most likely speak Arabic, Kurdish, Pashto and occasionally Urdu. In Moria and the Olive Grove, you can add French and Somali to the list, to name but two. Many people speak a combination of the above: for example, I know a family whose mother tongue is Kurdish but who also speak Farsi, Arabic and English. Incredible!

As I have previously discussed, MOTG volunteers are split between “internationals” (people who have come to Greece specifically to volunteer) and camp residents (refugees). Kara Tepe residents who speak English are invited to become volunteer interpreters. This is a vital job: in such a multinational community of refugees, employees and volunteers, set within such a life-changing humanitarian situation, the need for effective communication is ever-present.

Resident interpreters work primarily in the clothes shop and shared kitchen. Kara Tepe’s limited resources and the regular turnover of residents means that both services operate on a strict system. Use of the clothes shop is by appointment only; appointments are made at certain times of the week and clothes are distributed fairly using a quota. In the kitchen, stoves must be reserved, and residents must finish cooking on time so as not to delay the daily schedule. These systems need to be communicated clearly to new residents and upheld with existing residents, all while allowing their use to be a pleasant experience that enhances the quality of life at Kara Tepe. The presence of someone who understands what you are saying greatly contributes to this quality.

Another activity which requires resident interpreters is the new residents’ skills survey, which allows MOTG to benefit from the human capital of Kara Tepe. The purpose of the survey is to find out about the skills and work history of residents and to ask if they would like to use these skills as a volunteer. Interpreters are recruited in this way. The survey is also a chance for MOTG to make sure that new residents are settling in well and to allow both groups to get to know each other. Not only does the presence of an interpreter show residents that what they say is being taken seriously, but a resident interpreter will be in touch with the family’s culture – how to best introduce ourselves when showing up unexpected at the door, whether or not to take off our shoes when entering, what is unsuitable to ask, etc.

In a less formal context, multilingualism seems to be a fact of life in Kara Tepe. For many, Greece is not the first stopping point since leaving their home countries. Everyone using this particular route to travel to Europe has spent time in Turkey, meaning that Afghans and Arabs, for example, can build friendships through speaking Turkish. I love seeing these connections being made. Something else that I love hearing is the mix of languages in everyday conversations between friends: the mixed Greek-English greeting of Kalimorning! is my favourite (kalimera being the Greek for “good morning”), while many of my Afghan friends now greet me in Arabic instead of English. Anyone here who knows another language has the potential to be an interpreter. For example, as the children learn Greek at school, it is not uncommon to see them interpreting for their parents when speaking to Greek camp staff.

Among older residents, however, Greek has a more mixed reception. Some people accept that some basic Greek will be beneficial while they are living here, while others avoid Greek lessons completely on the grounds that they do not plan on staying here and never thought they would have already been here for so long. Of course, English is not one to shy away from in a multinational context such as this. The skills survey shows an overwhelming desire to learn or improve one’s English, since it is seen as the language of the world, the language that will always come in useful wherever in Europe you end up living. Time and again, this is the number one priority for residents of all ages.

On a more personal level, while I love being able to use Arabic daily in Kara Tepe, it is often overwhelming. Many now know me as the international volunteer who speaks Arabic, and I sometimes find myself in a situation where several people are demanding my attention at once. Even in a monolingual context, trying to process several requests simultaneously while maintaining a professional demeanour is tough; adding a multilingual dimension on top of this makes my Arabic come out… very… slowly. In those moments, I feel like my brain has been dropped into quicksand! It is a challenge, but one that I would not give up. My ability to speak Arabic in these situations is improving, and I am receiving invaluable exposure to the realities of interpreting in the humanitarian sector.

Here is a summary of what my linguistic self has been doing over the past fortnight, as well as my usual duties:

I will conclude again as I did last time, with some stand-out moments from the past fortnight: 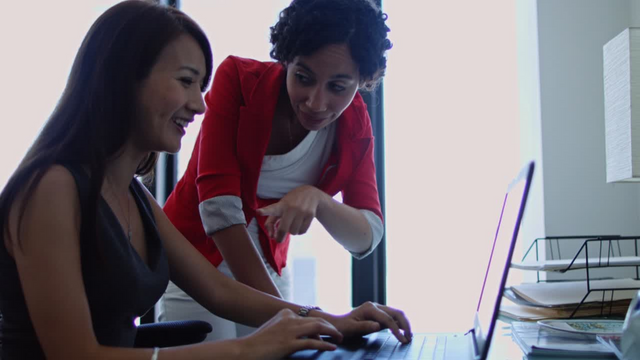 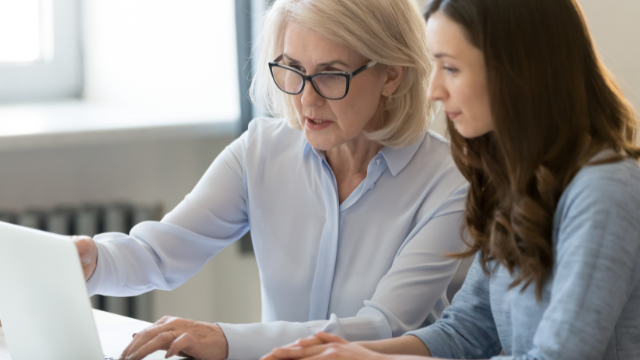 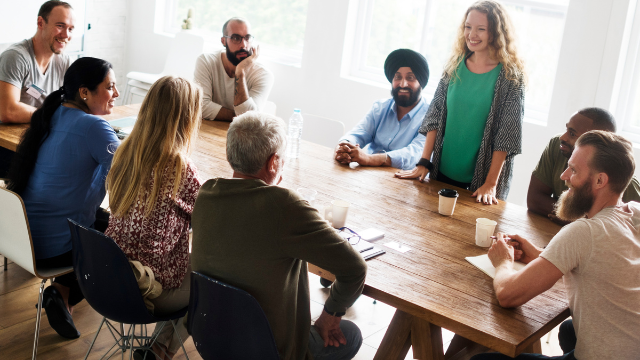