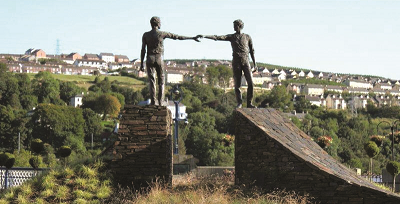 Hands Across the Divide - sculpture in Derry/Londonderry

I was thrilled to be booked with a colleague to interpret in Northern Ireland recently, but initially was unsure why two of us had been booked for one client. It is apparently policy in Northern Ireland to book two public service interpreters (PSIs) for lengthy hearings in the Crown Court. From the court’s point of view, it means wall-to-wall interpreting, as no interpreter rest breaks are required and, as far as we were concerned, there was much less fatigue than when working in the courts in England.

In our interpreters’ planning meeting the night before the hearing, we decided to work 30 minutes on and 30 minutes off. However, it turned out to be much more practical, and less disruptive, to wait for natural breaks in the counsels’ speeches or in the witnesses’ evidence. While in the dock, the defendant was flanked by a security guard, so we had to be mindful of the seating arrangements every time we swapped over.

My colleague and I each got equal bites of the cherry, in that whoever interpreted conferences between the defendant and his barrister in the cells then had a break while the other picked up the baton in the court room, and likewise before and after adjournments for refreshment breaks.

Working away from home means spending at least some ‘down time’ with your interpreting partner – in this case, three days in a hotel in the middle of nowhere. Fortunately I got on extremely well with the other interpreter, even though it was the first time we had met, as the language service provider had booked us separately before we had a chance to recommend our usual interpreting partners. It could have been disastrous but he was a highly competent professional.

Northern Ireland is a relatively small geographical area and, we were told, it can be quite difficult to source local interpreters who are objective enough to interpret in Criminal Justice System (CJS) court cases there, as they may have links to someone involved. Nor are there as many Diploma in Public Service Interpreting (DPSI) qualified interpreters in NI as there are in England. In 2013, 60 or so PSIs interpreted for the CJS at the G8 Summit in Belfast and almost all of us had been sourced from England. Of course, the irony is that I have masses of assorted aunts and cousins in NI – a fact which I had made known to the client, who told me that this was an advantage because I would be familiar with “the territory”. If that isn’t confusing I don’t know what is!

There are still some visible reminders of The Troubles and the court (like most courts and police stations in Northern Ireland) was surrounded by a tall barbed-wire fence. On booking a taxi to take us back to our hotel, one of the police officers on the case advised us not to mention why we were in court because “not everyone appreciates the police here”. In fact, the taxi drivers who took us to and from the court each day liked nothing more than a good chat about politics and religion as we sped past houses with union jacks or tricolours outside, depending on each area’s political affinities. Even to this day, my family members live and work in religiously defined areas and ‘mixed marriages’ (between Catholics and Protestants) are still uncommon.

Preparing for the job

Although it is part of the UK, NI has some different laws and regulations – several relating to The Troubles. I requested advance disclosure of the pleadings in the case (statements and other documents filed by the parties with the court) but to no avail due to ‘confidentiality’ (as usual with the CJS). All that the agency was able to obtain from the Northern Ireland court service was the wording of the charge under the relevant NI Order. Given that I had worked on similar cases in England, there was no nasty legal terminology of the “beam me up Scotty” type.

It goes without saying that having a legal background is a tremendous advantage for a PSI in the CJS. Refusals to provide advance disclosure of documents do beg the question as to how unprepared and, more often than not, not legally qualified PSIs are supposed to cope. My motto is “a good interpreter is a prepared interpreter” and ‘prepared’ means knowing and understanding your legal terminology before you even step foot in court.

We were overwhelmed by the respect – even admiration – for our craft that we were shown in NI. The other professionals working on the case (solicitors, barristers and police officers) treated us as equals, which is very rare in England in my experience.

Likewise, the client didn’t put us up in a grotty hotel or in rooms above a noisy pub, as some do in England (yes really!), but instead booked us into a comfortable hotel in a peaceful rural setting – the only downside being that we were miles from anywhere. The breakfast was either a ‘full’ or a ‘small’ Irish breakfast – the ‘small’ option still huge by English standards and including copious amounts of fried potato and soda bread.

Considerations during the hearing

Initially audibility was poor. My colleague was seated next to the defendant in the dock (in this court it was of the glass-enclosed variety). As is usual in the Crown Court, the barristers were seated in front of us, facing the judge and jury with their backs to us. A cry for help to the judge resulted in a microphone and headphones being speedily provided.

The barristers spoke at a manageable speed, with one notable exception, who delivered huge chunks of information without seeming to pause for breath, despite several alerts to our presence. Visibility from both the dock and the witness box gave us panoramic views of all of the players in the court room, so there were no problems there.

As regards comprehension issues, the defendant’s French was heavily accented, as it was her second language and she had apparently never lived in France. Her English was limited to what she had picked up on remand in prison awaiting trial.

All of the legal personnel spoke English with strong Northern Ireland accents, peppered with such gems as ‘wee girl’ and exclamations like ‘ock!’. Their political stance was revealed by clues such as their use of ‘Londonderry’ (used by unionists) versus ‘Derry’ (generally favoured by Irish nationalists). Having family in Northern Ireland, and therefore being au fait with not just the politics but also the geography and culture, turned out to be a huge advantage.

Sue Leschen MCIL is a Chartered Linguist, a lawyer-linguist and the Director of Avocate, a legal and commercial French interpreting and translation company in the UK, which is also an independent training provider. She sits on the committees of various professional language organisations, and is a member of CIOL Council.