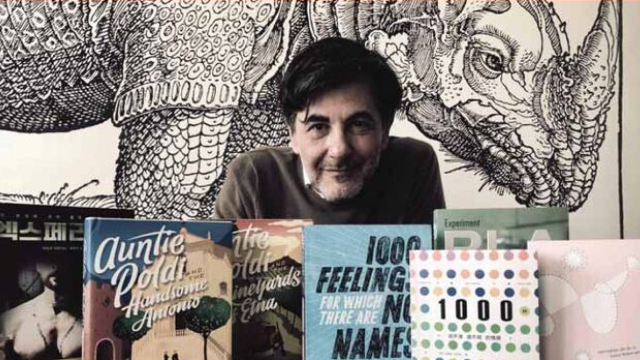 I discovered Mario Giordano at a Graz train station on my way back to London. It was a freezing morning and it started to snow. I got myself a cup of coffee, sat down in the waiting room and found a book that somebody had left there: Tante Poldi und die sizilianischen Löwen (Auntie Poldi and the Sicilian Lions).

The blurb said: “On her 60th birthday, Auntie Poldi retires to Sicily, intending to while away the rest of her days with good wine, a view of the sea and few visitors. But Sicily isn’t quite the tranquil island she thought it would be. When her handsome young handyman goes missing – and is discovered murdered – she can’t help but ask questions. Soon there’s an investigation, a smouldering police inspector, a romantic entanglement, one false lead after another, a rooftop showdown, and finally, of course, Poldi herself, slightly tousled but still perfectly poised.”

I managed to squeeze it into my heavy suitcase, wondering why an Italian author was writing about Bavarian women. I soon found out my assumption was wrong. Mario Giordano is the son of Italian migrants and one of Germany’s most versatile novelists and screenwriters. His Auntie Poldi murder mysteries are on the bestseller lists in Germany and the US. Auntie Poldi and the Sicilian Lions, his first novel translated into English, was an IndieNext Pick, a B&N Discover Selection and an Amazon Top Ten Best Book of the Month.

His muse is Albrecht Dürer’s Rhinoceros (1515). A large print of the woodcut hangs in his workspace as a symbol of storytelling. It was drawn based on a written description and sketch of a rhinoceros that died in transport, and which Dürer never saw. His imagination and mastery transformed it into an immortal being, with hard plates covering its body and a horn on its back. “That’s the magic of storytelling. And that’s the way it is with stories: something has to perish to be resurrected,” says Giordano.

The prolific author has penned over 25 novels, books for children and young adults, and art books, as well as TV screenplays. The award-winning film Das Experiment, based on his novel and screenplay, was a huge success in 15 countries. He also works as Head of Content Development for Bastei Lübbe publishing, developing digital book series for the US, Chinese and German markets.

So when he agreed to speak at the German Language Society's (GLS) November event, we were thrilled. His books are available in at least seven languages, and his first translator into English was John Maxwell Brownjohn (1929-2020). Maxwell translated more than 160 books, winning the Helen and Kurt Wolff Prize and the Schlegel-Tieck Prize for German translation three times. He also collaborated with Roman Polanski on Tess, Bitter Moon, The Ninth Gate and The Pianist.

At the GLS event, Mario Giordano will discuss the relationship between the author and translator. What does the translator need in order to translate a good novel and maintain the quality? As a speaker of German, English, Italian and Korean, he offers unique insights.

It is thanks to that unexpected encounter with Auntie Poldi on a snowy train station that one of the most famous contemporary German writers will be our guest this winter, and we couldn’t be more excited. So if you find a book, take it with you.

The Linguist
1 week 4 days ago

The Linguist
1 month 3 days ago

The Linguist
2 months 1 day ago

The Linguist
2 months 4 weeks ago

The Linguist
3 months 1 week ago