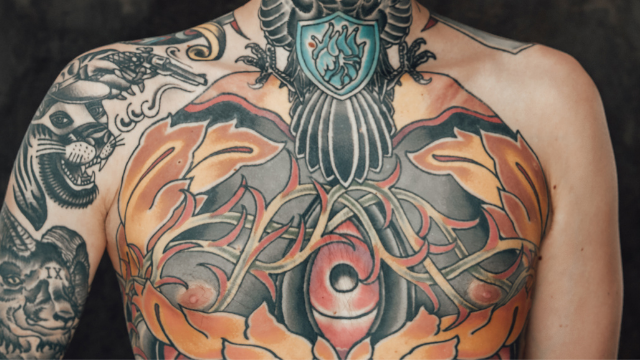 Writing on the body can be a covert form of communication, says Maurice Varney

‘Every picture tells a story’ has been used many times to explain art which at first seems inexplicable. There may be art that has no intended meaning, but it will always have meaning for the viewer. The same applies to tattoos. Someone who has HATE tattooed on one hand and LOVE on the other may do this simply for effect, or they may have the intention of sending out a message. Certainly other people will have their own interpretation of such tattoos and why they are there. Many people have tattoos in foreign languages but do not know what they mean. This is dangerous because something offensive could be put on the skin. We should know what our tattooed skin is saying.

Research into the language of tattoos is limited. Some of the most thorough research has been done in Russian prisons. The three-volume Russian Criminal Tattoo Encyclopaedia (2004-08) explains the meanings of tattoos on prisoners. Many are political and/or obscene, and rather chilling and horrific in the history they reveal. In Russian Prison Tattoos (2003), Alix Lambert says that in contemporary Russia, “The tattoos you wear in prison are your dossier. They say ‘I am a ranking Thief-in-Law, a killer for hire, a junkie or a Downcast.’ They tell where you fit in the Byzantine caste system that makes up the unofficial administration of the modern day Gulag.” Be warned, though: you may find some of the tattoos illustrated disturbing and even revolting. Such is Russian prison life.

Many have meanings tied closely to the individual and to the prison environment. An ‘anti-social’ inmate – one who refuses to work and is hostile to the law-enforcement agencies – is tattooed with a diamond divided into four. Dating to before the Bolshevik revolution, the scarab beetle is the symbol of success as a thief, while a stylised Russian church, applied to the thumb, also signifies an accomplished thief. Design 1 (above) identifies a criminal boss – a ‘legitimate thief’ who has great authority over the other prisoners.

Design 2 was worn by young men in the time of the Soviets. БОГ, meaning ‘GOD’, is an acronym for Было осудино государство (‘condemned by the State’). An anarchist who rejects prison rules may be tattooed with an ‘A’ in a diamond, but usually only in western Russia and not in the camps of Siberia. The swastika has no direct link with the Nazis or fascist Germany, but is also worn by an anarchist. Design 3 means the convict is dangerous. Inmates with this tattoo are admired by the young as they possess status.

However, not all tattoos are like the prison ones. Many give delight to wearer and viewer alike. My 86-year-old friend just lost her husband and, as part of her recovery from grief, she is having a butterfly tattooed on her shoulder. She has wanted this all her life. I have an artist friend whose medium is tattoos. He creates beautiful pictures on clients’ skin.

My father, who spent seven years in the Indian army in the 1920s and 1930s, was tattooed from his ankles to his neck. It was not until I went to a swimming bath, at the age of 7, that I realised not all men were like that. You could read my father like a book. The world of tattooing is a language as communicative as any other. It is well worth studying.

The Linguist
11 months 5 days ago

The Linguist
11 months 2 weeks ago

The Linguist
12 months 3 days ago

The Linguist
1 year 1 week ago

A class act for Togo