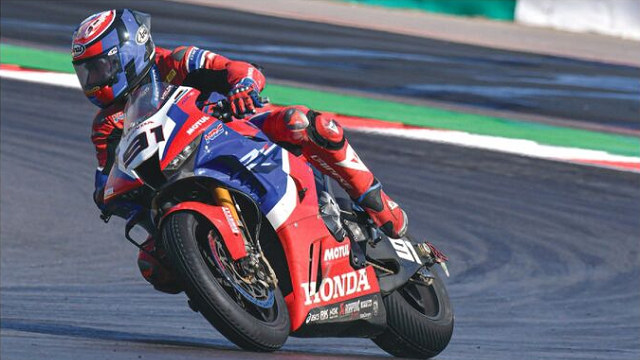 The Superbike World Championship is an international racing series for production-derived motorcycles. Founded in 1988, the championship is contested over roughly 13 rounds, which are held at some of the world’s most famous racetracks, from Australia to Qatar, and from Thailand to Spain, between March and October. Riders take part in three races per weekend, accumulating points as they battle it out for the world championship title.

In pre-Covid times, up to 50,000 spectators would attend events, with 300 million viewers following on TV globally. The riders and teams hail from many parts of the world, meaning that visitors to the paddock area will hear a stream of different languages and dialects being spoken.

In addition to a dedicated crew of engineers and mechanics, each team will generally have a press officer who, very broadly speaking, takes care of everything media and communications related. In reality, a press officer can find themselves involved in a whole host of different activities, which vary depending on whether you’re at the racetrack or back at base. While a day in the office is more about planning, organising and scheduling the various race-related events, a day at the track is much more hands-on. After 13 years’ experience of this type of work, I find that both require professional language skills.

In the days/weeks before an event, it is important to organise the riders’ schedules. I draw up a detailed timetable with the various media appointments, one-to-one interviews, team meetings, and fan and sponsor events, and distribute this to the riders. The idea behind the schedule is to prevent additional commitments being added once we get to the racetrack, so that the athletes are not overloaded, and to ensure that all potential events can be vetted and approved ahead of time.

The schedule may be put together in Italian or English, depending on the athletes’ language knowledge, with most riders having a good understanding of both. Riders I have collaborated with have come from Spain, Australia, the UK, France, Italy, Germany and Japan, and they all spoke English, if not Italian too. Interestingly, many of the athletes seem to pick up Italian, either as a result of working for an all-Italian squad or because they choose to reside in Italy for part of the racing season. The teams I’ve worked for are generally Italian, and as a native English speaker, I work mainly with Italian and English, but I use my Spanish and French occasionally when dealing with sponsors, guests and fans.

Once on site, it is my responsibility to get the athletes where they need to be on time, wearing the proper team uniform and knowing what is expected of them. During interviews, I am often called on to help interpret if a rider is not fluent in the interviewer’s language. This can sometimes put you on the spot, but as long as you have a good grasp of the terminology and the ins and outs of the sport, the rider is unlikely to throw up anything too unexpected.

In fact, one of the first things I had to get to grips with when starting out was motorsport-specific terminology, which ranges from bike components to race-craft, and even medical terms in case of rider injury. It is important to know the difference between a forcella (‘fork’) and a forcellone (‘swingarm’); the meaning of terms such as un traverso (‘controlled rear slide’) and una staccata (‘violent braking action’); and what the rider means by mi ha spinto fuori (‘he pushed me out’, i.e. off the track) and sono andato lungo (‘I ran long’, meaning that the rider entered the corner too fast and was unable to turn correctly as a result).

A core duty of a press officer in a race paddock is the daily drafting and translating of press releases to update the global press on how the team is performing. The language these reports are drafted in largely depends on the nationality of the team and/or riders involved. So an Italian team with a Spanish rider might require reports in Italian, Spanish and the more widely accessible English.

I soon discovered that it was quicker and easier to draft the news in Italian, my second language, before translating it into my mother tongue. That way I avoid over-complicating the English or inserting turns of phrase that I might then struggle to render in Italian. As the release is designed to impart the events of the day and is therefore rather matter-of-fact in style, I retain the same structure and style across both languages, perhaps just ‘cleaning up’ the riders’ comments a little if there is anything excessively crude or critical (you’d be surprised!).

I found that a great time-saving technique is to keep brief notes on my phone throughout the day’s track sessions, so that when it comes to providing a summary of the action in the evening I am already ahead of the game. The writing of these reports is extremely time-sensitive, and the quicker you can get them published and out to the press, post-race, the greater the chances of media coverage. The internet connection can sometimes play havoc with your schedule though, with the media rooms at international racetracks varying from ultra-equipped to what is essentially a glorified tent.

Writing and translating aside, an array of tasks can arise on any given day – anything from liaising with key sponsors and fans in the various countries the championship visits, to coordinating with the championship organisers, managing team social media channels, and looking after guests and VIPs. There’s a lot of troubleshooting. Many pressing issues – large and small – can arise unexpectedly and have to be resolved in the moment. Perhaps the hotel has mixed up our reservations, or two sponsors want to schedule clashing events and both require the attendance of the rider, or the flight company has misplaced some of our bags, or a guest needs extra tickets last minute (despite said tickets being like gold dust).

Although these tasks might not traditionally come under a press officer’s remit, they often fall to me because I am the native English speaker on a largely Italian-speaking team. The job is about thinking on your feet, collaborating, being efficient and (probably above all) being meticulously organised. I thrive in this fast-paced world and have always loved meeting with people from different countries who share a passion for racing, including celebrities such as Keanu Reeves, Michelle Rodriguez, Michael Jordan and Matt Le Blanc.

I have been part of three championship-winning teams and worked with a number of world champions. A highlight was F1 legend Michael Schumacher coming to test ride the Ducati bike on one occasion. The fast-paced environment is also tiring, with a ‘race weekend’ extending from Wednesday to Sunday, and from 7am to whenever the work is done.

My language skills have been invaluable, and I have found that the PR and communications work perfectly dovetails with my role as a freelance translator. Much of my day-to-day work has nothing to do with racing, in that my translation specialisms include fashion, tourism, luxury goods and the more general fields of business and marketing. But I love the variety that these two roles bring, as no two days are ever quite the same.

The Linguist
1 month 3 weeks ago

The Linguist
3 months 1 week ago

The Linguist
6 months 2 days ago

The Linguist
6 months 2 weeks ago